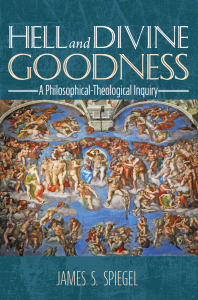 Within the Christian theological tradition, there has always been a variety of perspectives on hell, usually distinguished according to their views about the duration of hell’s torments for the damned. Traditionalists maintain that the suffering of the damned is everlasting. Universalists claim that eventually every person is redeemed and arrives in heaven. And conditional immortalists, also known as “conditionalists” or “annihilationists,” reject both the concept of eternal torment as well as universal salvation, instead claiming that after a finite period of suffering the damned are annihilated. Conditionalism has enjoyed somewhat of a revival in scholarly circles in recent years, buoyed by the influential biblical defense of the view by Edward Fudge. However, there has yet to appear a book-length philosophical defense of conditionalism . . . until now. In Hell and Divine Goodness, James Spiegel assesses the three major alternative theories of hell, arriving at the conclusion that the conditionalist view is, all things considered, the most defensible position on the issue. In the recent history of philosophy few works have appeared which favorably portray Idealism as a plausible philosophical view of the world. Considerably less has been written about Idealism as a viable framework for doing theology. While the most recent and significant works on Idealism, composed by the late John Foster (Case for Idealism and A World for Us: The Case for Phenomenological Idealism), have put this theory back on the philosophical map, no such attempt has been made to re-introduce Idealism to contemporary Christian theology. Idealism and Christian Theology is such a work, retrieving ideas and arguments from its most significant modern exponents (especially George Berkeley and Jonathan Edwards) in order to assess its value for present and future theological construction. As a piece of constructive philosophical-theology itself, this volume considers the explanatory power an Idealist ontology has for contemporary Christian theology. When it comes to contemporary philosophical problems, metaphysical idealism-or Berkeleyan immaterialism-is not taken seriously by most philosophers, not to mention the typical Christian layperson. This state of affairs deserves some attempt at rectification, since Idealism has considerable explanatory power as a metaphysical thesis and provides numerous practical and theoretical benefits.

Such thinkers as George Berkeley and Jonathan Edwards believed that Idealism is especially amenable to a Christian perspective, both because it provides a plausible way of conceptualizing the world from a theistic standpoint and because it effectively addresses skeptical challenges to the Christian faith. The contributors to this volume explore a variety of ways in which the case can be made for this claim, including potential solutions to philosophical problems related to the nature of time, the ontology of physical objects, the mind-body problem, and the nature of science. – See more at: http://www.bloomsbury.com/us/idealism-and-christian-philosophy-9781628924060#sthash.GUnO6MI8.dpuf Socrates, Plato, Aristotle . . . great philosophers have a lasting impact. For them, words and ideas are power. They can turn a phrase inside out and flip an argument on its head. They can put a spin on the world. But this power may be used wrongly—and the best response is not to avoid it, but to learn how to use it rightly! In the words of the apostle Paul, “See to it that no one takes you captive through hollow and deceptive philosophy.” Are you ready to match wits?

James Spiegel insists that studying philosophy is not only intriguing and mind-opening, but also crucial to following Paul’s counsel. Find out how you can navigate ideas as a philosopher and distinguish between human wisdom and the wisdom of God. The new atheists are on the warpath. They come armed with arguments to show that belief in God is absurd and dangerous. In the name of societal progress, they promote purging the world of all religious practice.  And they claim that people of faith are mentally ill.  Some of the new atheists openly declare their hatred for the Judeo-Christian God.  Christian apologists have been quick to respond to the new atheists’ arguments.  But there is another dimension to the issue which begs to be addressed–the root causes of atheism. Where do atheists come from?  How did such folks as Richard Dawkins, Sam Harris, Daniel Dennett, and Christopher Hitchens become such ardent atheists?  If we are to believe them, their flight from faith resulted from a dispassionate review of the evidence.  Not enough rational grounds for belief in God, they tell us.  But is this the whole story?  Could it be that their opposition to religious faith has more to do with passion than reason?  What if, in the end, evidence has little to do with how atheists arrive at their anti-faith?  That is precisely the claim in this book.  Atheism is not at all a consequence of intellectual doubts.  These are mere symptoms of the root cause–moral rebellion.  For the atheist, the missing ingredient is not evidence but obedience.  The psalmist declares, “The fool says in his heart there is no God” (Ps. 14:1), and in the book of Romans, Paul makes it clear that lack of evidence is not the atheist’s problem.  The Making of an Atheist confirms these biblical truths and describes the moral and psychological dynamics involved in the abandonment of faith.

“The Making of an Atheist is a helpful book that introduces the reader to a biblical analysis to the nature and roots of unbelief.  While not disparaging the use of apologetics in laying out a case for theism, Spiegel shows that the central issues influencing disbelief are often more a matter of a commitment to moral and spiritual independence than to an objective assessment of the evidence.”  —Gregg Ganssle, Yale University Philosophy Department and the Rivendell Institute

“Most of the work being done today in response to atheism focuses on intellectual issues and arguments against belief in God.  In The Making of an Atheist James Spiegel has crafted a clear, crisp, compelling case that there are non-rational moral and psychological dynamics that lead to unbelief.  Rooted in Scripture and argued with the precision of a trained philosopher, this powerful little book is a must read for theists and atheists alike.”  —Chad Meister, Bethel College Philosophy Professor, author of Building Belief and co-editor of God is Great, God is Good The Love of Wisdom:  A Christian Introduction to Philosophy (B&H, 2009)  Buy now

Publisher’s Description: Philosophy is defined as the love of wisdom, and college students will certainly admire this Bible-informed introductory level textbook’s fun approach to an often heady subject. The Love of Wisdom is distinct in its engaging style that includes humor and copious popular culture illustrations to heighten reader interest and clarify important concepts. The book even addresses two key topics often omitted by other texts: political philosophy and aesthetics (philosophy of beauty and the arts). Students and teachers can also make great use of the study questions for each chapter, a glossary of terms, and further reading suggestions.

“Well-written, well-argued and highly accessible, The Love of Wisdom is a marvelous example of what an introductory philosophy text should be. Not only do Cowan and Spiegel provide an up-to-date map of the often perplexing philosophical landscape, but they do so in a way which encourages readers to take every thought captive for Christ.” —Doug Blount, Dallas Theological Seminary From Publisher’s Weekly:  “Spiegel, philosophy professor at Indiana’s Taylor University, takes deep issues of the Christian faith and dumps them smack into real life with a little help from his children. Their questions—“Dad, where does God live?” “Dad, does God speak English?” and “What does God know?”—open the door to discussions about God that solicit satisfying answers from Dad. Spiegel’s responses and ensuing comments will satisfy adults as well, especially those looking for beginning and intermediate study on topics such as God’s omniscience, the Golden Rule, God’s presence and human origin and destiny. Spiegel ponders the great issues of the faith with a light touch, thanks to the innate comedy of kids, but also to his own brand of humor. No doubt some readers will wish for more depth when it comes to doctrinal fundamentals, but rather than exhaustive study, the point is that God touches human hearts through geckos, hide-and-seek tag and the occasional possum. Spiegel shares his own wonder as he fields FAQs from the fertile, imaginative, earthy minds of his children.” Faith, Film, and Philosophy: Big Ideas on the Big Screen is a book that applies Christian philosophical analysis to cinema.  Featuring over a dozen essays treating diverse issues in recent and classic films, this volume addresses a domain of popular culture that, until now, has been unexplored by Christian philosophers.  The content is philosophically rich but non-technical and will appeal to a broad audience of readers.  Chapter themes vary widely but are all directly relevant to Christian philosophy.  Likewise, the book represents a broad range of film genres (e.g., domestic, foreign, documentary, drama, horror, etc.). The Benefits of Providence: A New Look at Divine Sovereignty (Crossway, 2005)  Buy now

In this book Spiegel applies the high view of providence to theological matters such as divine conservation of the world, miracles, and divine emotion.  He discusses implications of the high view pertaining to the practice of science, the problem of evil, and moral formation.  The guiding theme of the book is the concept of God as a divine artist and the world as his art work. How to be Good in a World Gone Bad: Living a Life of Christian Virtue (Kregel, 2004)  Buy now

Publisher’s comments: An engaging, down-to-earth manual that helps Christians figure out how to really live a “good” life. Organized around twenty-two virtuous character traits-including humility, discretion, diligence, generosity, creativity, wit, justice, patience, peace, gratitude, faith, and love-this is more than a book of suggestions. This is a manual for how to be “blameless and pure, children of God without fault in a crooked and depraved generation . . .” (Phil.. 2:14). 224 pages. Paperback. $12.99

“This book is a workout for the Christian soul. It will stretch you in ways you did not think possible, but after reading it you will feel stronger in the faith than ever before.” – Stephen H. Webb, Professor of Religion, Wabash College. Author of Good Eating, The Divine Voice, and Taking Religion to School Publisher’s comments: Spiegel deftly analyzes the concept and content of hypocrisy, then moves to a discussion of its morality and its relation to moral weakness and sanctification. In his closing chapter he takes up the charge of the church’s hypocrisy and whether it poses a sufficient reason for rejection of Christian truth, as critics maintain.

“A unique and profound treatment of a basic structure of evil that permeates our homes, communities, and institutions, secular and sacred. I recommend it highly to anyone who needs to understand why life goes as it does. It deals with a primary topic in the teachings of Jesus which needs to be applied to the texture of our daily lives” – Dallas Willard, professor of philosophy, University of Southern California, author of The Divine Conspiracy, The Spirit of the Disciplines, and Renovation of the Heart