In the final years of his life, Dietrich Bonhoeffer worked on a book on ethics and was never completed, though he made substantial progress on it. It was eventually published posthumously. In his Ethics, Bonhoeffer discusses the question, what is meant by telling the truth? And in the course of addressing this question, he also considers what it means to lie.

Bonhoeffer begins by recognizing that there is a general demand for truthfulness, but he notes that the context of relations is crucial for understanding the demand. Thus, for example, a parent’s claim on a child is different than a child’s claim on the parent when it comes to truthfulness. There are many things that an adult understands about a given subjects that simply cannot be comprehended by a child, and this has implications for just how much a parent is duty-bound to communicate to a child.

The truthfulness we owe God is both truth in principle and concrete, since God has placed us in real, concrete relations with one another. And this is a deeply moral matter because “the ethical cannot be detached from reality,” and when we speak we express an account of reality. Therefore, Bonhoeffer says,

the real is to be expressed in words. That is what constitutes truthful speech. Every word I utter is subject to the requirement that it shall be true. Quite apart from the veracity of its contents, the relation between myself and another man which is expressed in it is in itself either true or untrue. I speak flatteringly or presumptuously or hypocritically without uttering a material untruth; yet my words are nevertheless untrue, because I am disrupting and destroying the reality of the relationship between man and wife, superior and subordinate, etc. An individual utterance is always part of a total reality which seeks expression in this utterance. If my utterance is to be truthful it must in each case be different according to whom I am addressing, who is questioning me, and what I am speaking about (360).

Significantly, then, Bonhoeffer essentially affirms what is known as the correspondence theory of truth. On this view, dating back to the ancient Greeks, a statement is true if and only if what it asserts corresponds to some actual or “real” state of affairs.

Context is crucial when it comes to truthful speech, Bonhoeffer tells us. “Every utterance or word lives and has its home in a particular environment” (361). This is why it is very difficult to say what actually constitutes a lie. “The usual definition of the lie as a conscious 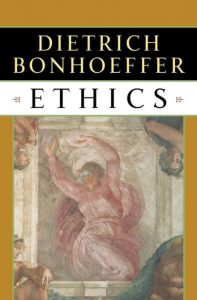 discrepancy between thought and speech is completely inadequate. This would include, for example, even the most harmless April fool joke” (363). So, Bonhoeffer says, “joking has nothing whatever to do with lying, and the two must not be reduced to a common denominator.”

Nor can we define lying as “deliberate deception of another man to his detriment,” since this would imply that even the deception of an enemy in war is wrong. Bonhoeffer concludes that “the lie cannot be defined in formal terms as a discrepancy between thought and speech” (364). In fact, he says, such discrepancy is not even a necessary condition for lying, since one may be quite truthful when intentionally misleading someone, such as through omissions or ambiguity.

The truth about lying, says Bonhoeffer, exists “at a far deeper level than in the discrepancy between thought and speech.” The essence of lying consists in consciously denying God’s reality, whether through speaking or otherwise. Note that this follows directly from Bonhoeffer’s correspondence theory of truth and Bonhoeffer’s conviction that what is real is just is what God has made actual—the world which God has “spoken” into existence (cf. Gen. 1).

It further follows, then, that a “lie is a contradiction of the word of God, which God has spoken in Christ, and upon which creation is founded. Consequently, the lie is the denial, the negation, and the conscious and deliberate destruction of the reality which is created by God and which consists in God, no matter whether this purpose is achieved by speech or by silence.”

Again, “God’s reality” is the world which God “spoke” into existence. The world is, as it were, God’s speech, his public word. So when we deny, negate, or misrepresent reality, we contradict God’s words. To lie is to directly challenge the Lord, perhaps even to implicitly declare oneself to be God. Here we see why lying is such a serious thing and why the trait of being a consistent truth-teller is a significant moral virtue.

Bonhoeffer’s account also helps us to understand a few things about the biblical account of Satan, the ultimate challenger of God and his reality. In Scripture we learn that Satan is fundamentally a liar and called by Jesus “the father of lies.” Without a proper understanding of the significance of truth and truth-telling, the moniker of “liar” might appear to be a random or even petty vice with which to identify the arch enemy of God. However, when we understand that truth is God’s reality and that a lie constitutes a fundamental challenge to God, we recognize how appropriate this description is, as is the very name of Satan’s, which means “deceiver.”

Bonhoeffer’s account also highlights the significance of Jesus statement, “I am the way and the truth and the life” (Jn. 14:6). We learn in John’s gospel that all things were made through Christ (Jn. 1:3), and the Apostle Paul tells us that all things were created in Christ, through Christ, and for Christ (Col. 1:16) and that “in him all things hold together” (Col. 1:17). In short, Christ is the ontological ground of all that is. So we might even say that he essentially is reality. And this is to say, on Bonhoeffer’s account of truth, Christ literally is truth.

These insights place a premium on truth-telling that is seldom acknowledged, perhaps because lying is so common. Evidently, we are natural born liars, and most people lie on a regular basis. In one sense, this shouldn’t shock us, since Scripture tells us that we are all innately moral rebels. “All have sinned and fall short of the glory of God” (Rom. 3:23), and we challenge God every time we sin, whether by lying or in other ways. But in another sense, the essentially Satanic nature of lying should shock us and even terrify us about our natural moral condition. Whenever we lie, after all, we are essentially doing Satanic work.

These points should reinforce our commitment to honesty, sincerity, and truth-telling. While there are certainly plenty of appropriate contexts for discrepancies between belief and speech, such as when joking, as well as when playfully deceiving in non-verbal ways (e.g., in athletic contests and surprise parties), genuine lies are an affront to the Lord and should not be a part of our lives.