The recent wave of violent protests has brought in its wake a surge of shootings in major U.S. cities and a spike in gun sales around the country. This prompts, yet again, questions about gun violence and gun rights in America. So Michael Austin’s God and Guns in America (Eerdmans, 2020) is a welcome book at this time. It is a work that provides much needed philosophical-theological analysis of many aspects of this complicated subject. Austin is critical of current American laws regarding gun ownership, but he is not in favor of abolishing the Second Amendment right to bear arms. Instead, he says, “the best way forward is to balance the right to bear arms with our rights to life, liberty, and the pursuit of happiness” (14). And he proceeds to explore multiple dimensions of the issue from a distinctly Christian perspective.

In the first chapter, Austin sets the stage for his book’s discussion by elucidating “Christian nationalism” and its problematic connection to the gun rights movement in America. He also highlights some key moments in the legal history of the Second Amendment Supreme Court decisions, most notably the relatively recent SCOTUS recognition of the individual rights view, which 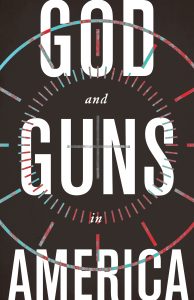 “interpret[s] the Second Amendment as protecting the individual right to own a gun” (12). Prior to this, Austin notes, the Court took a “collectivist view” of the Second Amendment, which maintains that the right to bear arms applies not to individual persons but to organized groups or communities. According to Austin, it was the 2008 District of Columbia v. Heller decision which was decisive in this regard.

Austin turns to a discussion of the nature of rights in chapter two, “The Right to Own a Gun.” He helpfully distinguishes between different kinds of rights, most notably legal rights and moral rights. Here he discusses what is likely the strongest foundation for gun rights: the right to life. As Austin puts it, “if a gun is needed for securing someone’s right to life, then we may be able to derive the right to own and use a gun from the right to life” (25). But he rightly points out that “if we accept the argument, it does not follow that the status quo regarding gun laws is acceptable.” Indeed, there must be some limits on the right to bear arms, just as there are limits on other rights. No one believes that individual citizens should be able to own and use missile launchers or nuclear bombs, but nearly everyone agrees that (reasonably qualified) citizens should be able to own and use pistols, shotguns, and rifles. So where does one draw the line? That is the key question in the gun control debate. In the end, says Austin, we need to balance gun rights with other rights and responsibilities, such as the right not to be shot and the moral obligation to use guns in self-defense only as a last resort. It is with this tension in view that Austin discusses stand-your-ground laws, noting a major problem with such laws—that “it is not always clear when one is truly in danger” (29). He concludes this pivotal chapter by granting that “there is a reasonable moral right to own a gun and that this right should be reflected in the law” but that “this is entirely consistent with the placement of legal limits on who can own and use a gun . . . for the purpose of defending life” (31). This is a reasonable, balanced, and popular general position on the issue, of course.

In chapter three, entitled “Guns, Lies, and Bad Arguments,” Austin reviews ten flawed arguments that are frequently used on either side of the gun debate in America. Some of these, such as that “violence is on the rise in America” and that “violence never solves anything” are just patently false. The homicide rate in America at the time of Austin’s writing was comparable to that in the 1950s. And violence sometimes does solve problems, as in the case of the defeat of the Axis powers in WWII and in many lesser known cases where would-be mass shooters have been taken out by security guards or lay people with guns. Other weak arguments make irrelevant points or false dichotomies, such as that “no law can stop all gun violence” and “it’s not a gun problem, it’s a heart problem.” Interestingly, Austin includes among the supposed “bad arguments” the claim that “guns protect us from tyranny and genocide.” While this is surely a common argument, which is no doubt wielded poorly by many people, it is not necessarily a poor argument in itself. But Austin is very critical of it.

Next, Austin discusses the various options for a Christian theology of violence. Here he discusses pacifism and just war theory, noting some of the major proponents of these views in the history of Christian thought. Pacifists generally eschew the use of violence and killing. Just war theorists affirm the justifiable use of violence and even killing, but they advocate a variety of delimiting criteria which must be met in order for violent actions to be morally acceptable. Rather than opting for one of these approaches, Austin advocates what he regards as a third option, which he calls “peace building.” Peace building, says Austin, “allows for violence only as a last resort and includes a very strong preference for nonviolence” (66). This is a curious distinction, since standard versions of just war theory explicitly recognize the exhausting of all peaceful alternatives as a necessary condition for justified violence. So, despite Austin’s suggestion that his view is an alternative to just war theory, it is actually a version of this view which places a particularly strong presumption in favor of non-violence.

Later in chapter 4, Austin discusses the appropriateness of congregants carrying firearms in corporate church worship services. It is a fascinating discussion of alternative perspectives which leads to a discussion in chapter 5 (“The Bible and a Gun”) of a variety of biblical arguments that have been made to justify the use of firearms as a means of self-defense (specifically, 1 Tim. 5:8; Heb. 10:32-34; and Luke 22:35-38). Austin concludes (rightly, I believe) that each of these biblical arguments is problematic, and he wisely comments at the end of the chapter that “many Christians seem to espouse views that are more reflective of one of the kingdoms of this world than of the kingdom of Jesus” (106).

In chapter 6 (“Christ, Character and a Colt-45”) Austin inquires into whether Jesus Christ would carry a gun. Austin concludes that he would not. Moreover, he maintains that “when [Jesus] told Peter to put the sword away, Jesus was disarming every Christian. . . .  They should lay down their lives, dying, not killing, in the name of Christ” (109). Austin’s argument is that such a posture of non-violence and even self-sacrifice is not only more reflective of Christ but is also a better fit for the development of other Christian virtues, including empathy and compassion. In this chapter, Austin wrestles with the challenge of the appropriateness of using guns in self-defense. He grants that this might sometimes be appropriate. But he concludes with this probing question which seems aimed at those who make the self-defense argument for the use of firearms: “Are we trusting in guns for things that we should be relying on God to grant us?” (119). This is challenging, to be sure. However, Austin avoids a likewise challenging counter: Should such reliance on God even extend to refusing to use guns to defend others (such as our own children) whose lives are being threatened? Just as in international contexts the duty to defend the innocent presents the greatest challenge to anti-war pacifism (e.g. defending Europe against the Nazis in WWII), the duty to protect the innocent and powerless in personal contexts presents the strongest challenge to personal pacifism. Presumably, this is one reason why Austin rejects outright pacifism.

In the book’s final chapter, “More Than Thoughts and Prayers,” Austin provides an extensive list of practical legal steps for dealing with our nation’s gun violence problem. These include universal background checks, restrictions regarding who can purchase a firearm, a federal “red flag” law, repealing “stand-your-ground” laws, a federal gun safety course, a ban on high-capacity magazines, and the exploration of assorted technological means of preventing the usability of stolen guns (e.g., the Bison Fingerprint Trigger Lock). Each of these proposals deserves extensive study, of course, but even this brief discussion is helpful. Austin concludes the book with a discussion of some relevant moral-theological considerations, appropriately reminding us that the more fundamental problem underlying gun violence is the human heart.

Michael Austin is to be commended for this much-needed work, which addresses one of the more divisive and complex issues of our time. He admirably strives for balance throughout the book and only occasionally fails in this aim (e.g. in his characterization “Christian nationalism” and his assessment of the anti-tyranny argument for gun rights). As is typical of Austin’s published works, his thinking is clear, organized, and insightful. I recommend this book to anyone who is interested in working out a theologically informed stance on gun rights and the problem of gun violence.