Every so often there appears a book which provides such an insightful cultural diagnostic that you wish everyone would read it. For me, Nancy Pearcey’s Love Thy Body (Baker, 2018) is one such book. Pearcey’s thesis is that numerous problematic trends in our culture, from the pro-choice movement to transgenderism to the hook-up culture, are all driven by a low view of the body. Specifically, a philosophical concept which she calls “personhood theory” serves as the common rationale for these movements. Personhood theory, she says, “presumes a very low view of the human body, which ultimately dehumanizes all of us” (p. 20).

Through most of history it was generally understood that to be a human being is to be a person. But in the 20th century—especially the early 1970s—philosophers began to differentiate these two things, introducing the body-person dichotomy. This concept was pivotal in the 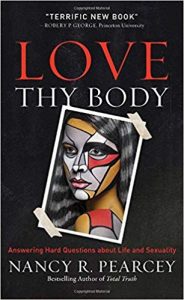 1973 Supreme Court decision Roe v. Wade, which legalized abortion throughout the country (proposing that the fetus is human but not a person under the 14th amendment).

From there, the body-person dichotomy has driven secular views on many other issues, including, euthanasia, physician-assisted suicide, homosexuality, transgenderism, and the hook-up culture. Pearcey says, “Christianity holds that body and soul together form an integrated unity—that the human being is an embodied soul. By contrast, personhood theory entails a two-tiered perspective that sets the body against the person” (p. 21). (Thus, it is important to note, Pearcey does affirm mind-body dualism. What she is critiquing is body-person dualism or, which is what she dubs “personhood theory.”)

The biblical, Judeo-Christian view is teleological, seeing purpose in the human body as well as the rest of nature, since it is designed by God. The modern root of personhood theory is Darwinism, which sees all of nature as an “amoral mechanism.” According to Pearcey, “if the body has no intrinsic purpose, built in by God, then all that matters are human purposes.” This means that the human body may be “manipulated and controlled to serve the human agenda, like any other natural resource” (p. 24).

This view is dehumanizing, because it implies that mere humans do not have rights.  Only persons do. But a constant theme throughout Scripture is that our bodies matter.  Nature is good. Our physical beings are created by and treasured by God.

Christianity emerged in a cultural context dominated by a low view of the body, due to the influence of Platonism and Gnosticism. With Jesus’ ministry of physical healing, his own physical resurrection, the Pauline concept of the body as God’s temple, and the doctrine of the resurrection of the body, among other things, the Bible puts a strong emphasis on the inherent sacredness of the human body. In the early modern period, the ideas of Descartes and Kant undermined this biblical view. More recently, Darwinism and contemporary materialistic philosophies rejected it altogether, and as our culture embraces materialism we see its dehumanizing effects.

Pearcey discusses some of the practical ways that personhood theory and its low view of the body are manifested in contemporary culture:

Pearcey notes several bizarre and problematic implications of the personhood theory. One of these is that it undermines women’s rights. If a “woman” is no longer defined biologically, then we cannot identify sex-based oppression. Moreover, even biological “men” can claim that their women’s rights are violated if they identify as women, just as such individuals are permitted to use women’s bathrooms in many states.

The influence of personhood theory has been vast in Western culture. Yet no one can agree on exactly what constitutes a “person”! Philosophers have proposed all sorts of conditions and criteria, but there is no consensus. In contrast, on the Judeo-Christian view that all humans are persons, there is clarity as to who are persons, and it is scientifically verifiable. For this reason, Pearcey maintains that the body-person dichotomy is anti-science.

Love Thy Body provides a much-needed constructive critique of a prevalent perspective in contemporary American culture. Although it contains many significant philosophical insights, the book is written in a semi-journalistic style which is fit for a popular audience. My only critique is that it is that the book is a bit heavy with examples which illustrate Pearcey’s points such that the discussion sometimes seems repetitive. It could have been tightened by 50 pages or so. But this is a relatively minor flaw which should not dissuade readers. I highly recommend this book!